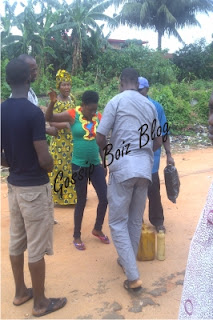 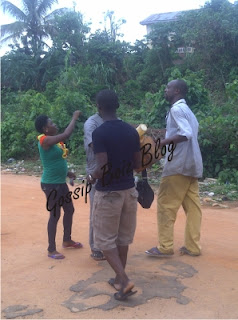 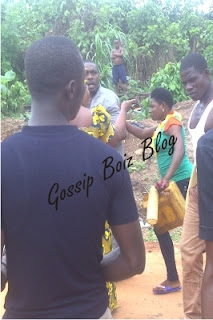 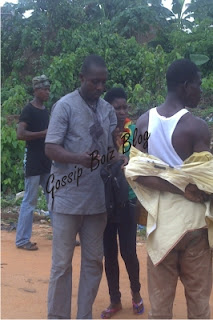 Two men were seen this morning fighting and ranting, at German Floor, off Owerri road, amuzukwu, Umuahia, Abia State.
According to Akandu “I was talking and laughing with my girl when this madman rushed & asked my girl what she is doing here with me, I tried to know what the problem is, he landed me a heavy blow that can knock an elephant down, ofcos my fellow man cannot hit me and I’ll let him go without injuries, he’s just lucky”
The girl Miss Onyinye a nurse said “I don’t know what is wrong with him, this is the 2nd time he’s doing this rubbish, and I’ve never talked with this guy so I don’t know what his problem is. People should talk to him oo or I’ll report him to the police.
When asked the young man, Nwandu he said “I don’t know that this girl is a crook, she go come collect money from me but still dey follow other guys, I don dey hear am b4 but na now I confirm am, the worst part be say she dey even deny she never see me, but I go tell them say dey born me 4 Aba. She say I go sleep for police, me & her go know who go sleep for police today.
Lol… wonders shall never end in this country. Your views GBB readers.
ALSO READ  D'Banj And Cassper Nyovest Show Off Amazing Ripped Bodies

Designer bags every style influencer must own inspired by Jackie Appiah

Ghanaian model, Hamamat, narrates how she was racially abused at 18 in Turkey

Soul Train Awards 2019: Spot some of your favorite outfits