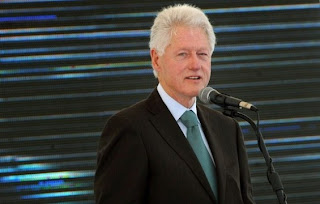 ABEOKUTA, Nigeria (AP) — Former U.S. President Bill Clinton said Tuesday that Nigeria must do more to alleviate the extreme poverty across the nation’s predominantly Muslim north in order to halt the wave of bombings, shootings and kidnappings by Islamic extremists there. Clinton’s comment comes as Islamic terror groups have claimed the kidnappings of foreigners in recent days from the region and Nigeria’s weak central government appears unable to contain the spreading violence. He said that poverty remains the main driver for the attacks and needs to be addressed by strong local and federal government programs. Extremists from a radical Islamic sect known as Boko Haram killed at least 792 people last year in Nigeria, according to an Associated Press count. Fighters who said they belong to Boko Haram claimed responsibility Monday for the kidnapping of seven French tourists in northern Cameroon. Ansaru, which analysts believe is a splinter group from Boko Haram, has claimed the kidnappings of seven foreigners — a British citizen, a Greek, an Italian, three Lebanese and one Filipino — all employees of a Lebanese construction company named Setraco. “You have to somehow bring economic opportunity to the people who don’t have it,” Clinton said Tuesday. “You have all these political problems — and now violence problems — that appear to be rooted in religious differences and the all the rhetoric of the Boko Harams and others, but the truth is the poverty rate in the north is three times of what it is in Lagos,” Nigeria’s largest city. Clinton said that oil-rich Nigeria, which earns billions of dollars from its oil industry and is a major supplier to the U.S., must not take a “divide the pie” approach toward attacking poverty. That appeared to be a subtle reference to the endemic corruption that envelopes government and private industry in the country. “It’s a losing strategy,” the former president said. “You have to figure out a way to have a strategy that will have share prosperity.” Poverty is endemic in Nigeria, and corruption has siphoned away billions in oil earnings since the country began exporting crude more than 50 years ago. Government statistics show that in Nigeria’s northwest and northeast, regions besieged by Islamic insurgents, about 75 percent of the people live in poverty. Analysts say that poverty, despite decades of military rule by leaders from the north, coupled with a lack of formal education has driven the region’s exploding youth population toward extremism. Those attacks also have strained relations between Christians and Muslims in Nigeria. Clinton spoke Tuesday in Abeokuta as part of an awards ceremony put on by ThisDay newspaper and its flamboyant publisher Nduka Obaigbena, who has invited the former president several times to Nigeria, along with other celebrities. The event, put on by a newspaper publisher sometimes accused by his staff of not paying them from months at a time, was also attended by former Nigeria military ruler and President Olusegun Obasanjo.

Prince Andrew linked to another billionaire accused of r.a.p.e

Photos from the star-studded Nigerian premiere of ‘Queen and Slim’