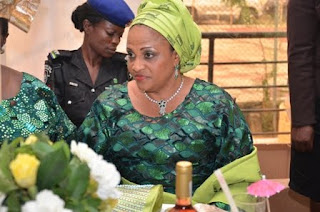 ied them the opportunity of a responsible government during times of sorrow, like the August 26, 2011 flood disaster that ravaged the state. The governor’s wife was held for a few days in London before she telephoned her husband who immediately flew out to the United Kingdom to save his wife and his administration from the embarrassment that the arrest could cause. The governor had to stand surety for his wife before she was temporarily released the weekend on her arrest. To ensure that the news does not get to public domain, Governor Ajimobi had to lie that he was traveling to Taiwan for “an emergency business trip”, and headed for London to stand surety for his wife. Met police authorities accept the surety-ship of a sitting high profile government official in cases of money laundering without which Mrs Ajimobi would have been declared wanted and Interpol sent after her. When Mrs Ajimobi returned to Nigeria two Sundays ago, she avoided public gathering, never honoured any invitation and cancelled all previous appointments. A community newspaper in London published the news of Mrs Ajimobi’s arrest with her picture lavishly used by the local daily. NEWSLEAK is making effort to get the photograph and use same on this website. According to investigations, Mrs Ajimobi is literally the human bank in charge of funds illegally deducted from the 33 local government councils in the state as well as theb N110million security monthly security vote of her husband. Rumours that Mrs Ajimobi is the courier for public funds running into billions of Naira allegedly stolen so far by the Action Congress of Nigeria-led government in the last 17 months were reinforced by the several contracts awarded to Mrs Ajimobi, including the poorly executed beautification project given to her for N1billion of taxpayers’ money. In addition, she has appropriated the State Action Committee on AIDS (SACA), which was hitherto under the purview of the Ministry of Health to her office and through this, she is sitting upon the $15million-Dollar World Bank funds released early this year for the control of AIDS in the state. To wriggle out of money laundering and sundry charges against Mrs Ajimobi, her husband has engaged the service of three Senior Advocates of Nigeria (SANs) led by Chief Wole Olanipekun. Following the expiration of the week-long bail granted Mrs Ajimobi to prepare her legal team as the case will be charged t court soon, she left the country for London early on Sunday, October 28 (that is 2days ago). Governor Ajimobi, it was scoped, has been running from pillar to post for face-saving strategies against the damning incident. He was said to have expressed determination to pay any price quoted by anyone that could be of help in preventing the scandal from becoming public knowledge as well as getting the “greedy wife” off the hook. The governor, NEWSLEAK is told, will be traveling out of the country this week to stand by her wife. It was also gathered that the senior lawyers are on their way out of the country for the legal fireworks in defence of Mrs Ajimobi. Feel Free to share GossipBoiz page. http://m.facebook.com/profile.php?id=162687477096254&refid=5 Twitter @pietro4nice pin:270DDB62