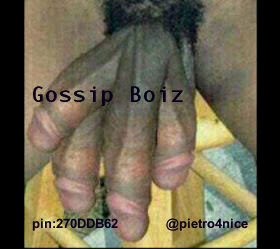 University of Port-harcourt (UNIPORT) can’t stop being in the news for the wrong reasons. After the widely villified Aluu 4 massacre and the shooting of some students of the institution by rampaging gun-men,another student seems to have fallen victim to some diabolical machinations. Obinna,21, a 200 level student of UNIPORT was reported to have developed multiple sex organs after an intensive 2 night sexcapade with his gay lover in a popular hotel in Ifako Gbagada, Lagos. He was alleged to have met the man on social networking site, Hi5 after which he was paid N20,000 for transportation to Lagos. He came and after the rendevous was paid the agreed sum of N150,000 only for him to discover in a jiffy that his penis wasb developing branches but lo and behold the partner was no where to be found! He raised an alarm which attracted people to the scene. Hope this will teach some dudes who have converted gay escapades to a means of making fast money a lesson. You just might be the next victim, desist from such acts before its too late. Like GossipBoiz. http://m.facebook.com/profile.php?id=162687477096254&refid=5 Twitter @pietro4nice pin:270DDB62

ALSO READ  Doctor vows not to treat any policeman, after bitter experience with them